If you have any questions or comments regarding the accessibility of this publication, please contact us at accessible@parl.gc.ca.

A. Introduction: The Value of Energy Data

Between 26 April and 12 June 2018, the House of Commons Standing Committee on Natural Resources (the committee) conducted a study on the current state and future of Canada’s national energy data. The committee heard from a wide range of experts about the benefits of, and gaps in, Canadian energy information systems, as well as best practices for managing energy data and analyses moving forward. The committee is pleased to present its final report, which includes the study findings and recommendations to the Government of Canada.

“ Data is a national resource that is no different from our natural resources like energy, water, minerals, metals, or timber. If developed appropriately, it has the potential to yield enormous value for all Canadians.”

Figure 1: The Contribution of Energy to the Canadian Economy 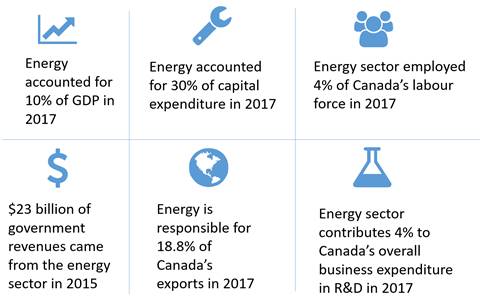 Source: Statistics Canada (as presented in a document submitted to RNNR).

Owing to the rapidly evolving nature of the energy sector, demand for Canadian energy data is constantly increasing. The advent and growth of new energy sources and technologies, coupled with Canada’s ongoing transition to a lower-carbon economy and greater public engagement in energy decision making are creating new demand for energy information.[2] In the words of Laura Oleson of Natural Resources Canada (NRCan):

As we look to the future, there are promising opportunities for energy data to be used in new ways to optimize industrial processes and reduce environmental impacts. Big data is enabling smart grids to improve efficiency and reduce the cost of electricity. Oil and gas companies are using AI-capable robots in oil exploration and production, which can increase productivity while reducing worker risk. Incorporating AI, big data analytics, and other information-based technologies into how we make, move, and use energy will be key for the continued competitiveness of Canada's energy industries....

In 2015, all the provinces and territories reached an agreement on a Canadian energy strategy that included goal 3.1: to “[i]mprove” the “quality of energy data across Canada.”[3] The aim of this report is to emphasize the importance of this national goal, and to offer further policy guidance to the Government of Canada, based on evidence from diverse experts from industry, civil society, academia, Indigenous organizations, the public sector and international agencies. The next section provides a brief assessment of Canada’s current energy information system, followed by a discussion of policy proposals and best practices for managing national energy data moving forward.

Canada has a broad community of energy data users and collectors. Data users include policy makers and regulators at all levels of government; industry producers and private sector investors; academics; Indigenous governments and communities; non-governmental organizations; international partners and agencies; as well as individuals, both as consumers and citizens. Similarly, Canadian energy information is the collective product of different businesses, governments, research institutions, provincial and territorial utilities, and non-governmental organizations, among others.[4]

“People are becoming far more engaged in their energy lives and they want energy information.”

In the federal government, most of the data related to Canadian energy is the product of the following four departments or agencies:

The Government of Canada has an open data plan that aims to help guide developments in energy data and information-sharing policies. According to Pippa Feinstein of Lake Ontario Waterkeeper, the plan commits to “expanding and improving open data across federal public services with special attention paid to the extracted sector, federal science activities, and geospatial data.” In addition, Canada collaborates with international partners and agencies on information sharing initiatives pertaining to energy. A recent example is the North American Cooperation on Energy Information initiative, which, according to Ms. Oleson, has led to the creation of “the first ever shared map of North American energy supply infrastructure.”

“ Organization of [energy] information is important, otherwise we risk being a country that is data-rich

In its international recommendations for energy statistics, the United Nations Statistical Commission put forward best practices and principles regarding energy information, including: relevance and completeness, timeliness and punctuality, accuracy and reliability, coherence and comparability, accessibility and clarity, and political independence.[9] Witnesses generally agree that Canada’s energy information system could be improved according to these criteria. For example, the committee heard the following:

Figure 2: Level of Stakeholder Trust in Different Producers of Energy Information in Canada

Given that most energy resource development falls under provincial jurisdiction, rethinking Canada’s energy information system has been an intergovernmental endeavor. According to Ms. Oleson, the federal government has been involved in ongoing discussions with the provinces and territories about how Canadian natural resources data can be improved more broadly, including larger questions about what data should be required by government. In that sense, she thinks reforms to Canada’s energy information system “would fit into a broader, all-encompassing national data strategy.” Furthermore, Mr. Peterson told the committee that StatsCan has embarked on a modernization initiative that is putting more emphasis on collaboration and partnerships, stating that Canada has to adopt “a more integrated approach to data, taking advantage of these new sources of information that are becoming available and finding mechanisms of putting them together.”

C. Towards a One-Stop Energy Shop for Canada

In-person and online consultations conducted by NRCan’s Generation Energy Council found that Canadians want “a one-stop shop where they can go for reliable and independent information” on energy in Canada. Furthermore, the Expert Panel on the Modernization of the National Energy Board envisions the creation of “a new, independent Canadian Energy Information Agency, separate from both policy and regulatory functions, accountable for providing decision-makers and the public with critical energy data, information, and analysis.”[19]

“Data systems that are good are focused, they collect only the data needed, they maximize the use of that data so that it's collected once and used often.”

Several witnesses support the idea of an independent energy information agency in Canada. The committee heard that, by working with existing data providers and energy stakeholders, such an agency should be mandated to collect, validate, analyse and distribute detailed regional and national energy information that is accurate, timely, transparent, comprehensive, user-friendly, internally-consistent, free of charge, responsive to the needs of different sectors, and independent of political influence. To this end, the proposed agency would aim to accomplish the following objectives:

The committee heard that the proposed energy information agency should work in partnership with existing federal government departments, namely StatsCan and NRCan, as well as Indigenous governments and communities, provincial and territorial governments, the private sector, and other relevant energy data groups and public interest organizations across Canada.[21] For example, Francis Bradley of the Canadian Electricity Association recommended that the agency consist of partnerships and information sharing agreements between the federal, provincial and territorial governments, “utilizing Statistics Canada for primary-source energy data or perhaps adopting this function itself.” Similarly, David Layzell of CESAR stated that the proposed agency needs to be closely linked to government departments that have the authority to collect energy data; “it needs a governance structure that engages the provinces, territories, municipalities, and industry associations that provide the data, as well as those organizations that are going to be users of that data.”

The committee also heard that a national energy information agency could be housed within existing federal organizations, namely StatsCan or the NEB.[22] Judith Dwarkin of RS Energy Group warned that setting up a new agency may be costly, stating that the NEB has “mounds of data, [and has] already taken the first step towards something that could look like a national energy database.” In considering whether or not to house an energy information provider within an existing federal organization or as a separate agency, government should take into account such factors including but not limited to: cost, political independence, ease of transition, pre-existing expertise and mandates, and the increased public trust enjoyed by independent agencies.

Witnesses identified several international models that could inspire reform in the Canadian energy information system – namely, the U.S. Energy Information Administration (EIA), Statistics Norway and the U.K. Committee on Climate Change.[23] According to John Conti of the EIA, most of his sophisticated clients extract 80% of their data needs from the EIA website on a weekly basis, which attests to the synergies and economies of scale of having one national energy agency. Pierre-Olivier Pineau of HEC Montreal pointed out that Norway, a major energy producer with a northern climate, would be a good source of inspiration for Canada. In addition to gathering statistics, the Norwegian equivalent of StatsCan conducts research and informs government, the investment community and the public on energy use, production and processing in Norway.

While reforming Canada’s energy information system is not a greenfield operation, the committee heard that it requires “substantial additional attention,” taking into account rapid evolutions in the energy sector, as well as the complex dynamics of data supply and demand in the digital age. According to Ms. Gattinger, reforms should be designed with long-term needs in mind and should aim to “maintain and leverage existing expertise and tailor Canada's system to the country's local circumstances.” She added that Canada’s focus needs to be on information, not just data: “Data is essential, but transforming data into information that's both relevant and accessible is crucial.”